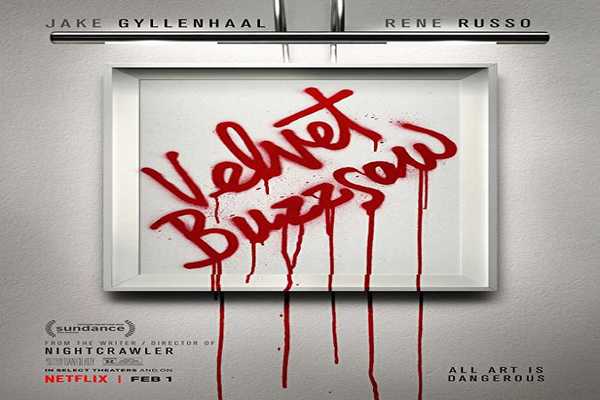 Netflix’s Velvet Buzzsaw movie is a decent horror satire based on modern art industry. The movie embeds itself in the world of art and shows us the other (darker) side of it. It blatantly reveals the ugliness of the art fraternity.

After watching its trailers, I was under the impression that it is a great ghost movie, but unfortunately this is not the case. There’s no ghost in the movie (at least ostensibly).

The film starts at an art show, where a slew of people related to arts and culture make appearance at a high-end exhibition. It is here, we are introduced to our lead characters: Morf Vanderwalt (an icy art critic), Rhonda (a money loving art gallery owner) and Josephina (an astute worker at the gallery). In addition to them, we are also introduced to Piers (an old school artist), Damrish (an upcoming artist looking to rise above graffiti to make it big among the elites of the industry), Coco (a young but pragmatic worker at the gallery) and Gretchen (a prideful editor).

As the movie progresses, Josephina stumbles upon a flat full of paintings (belonging to his deceased neighbor). She is enamored by them despite of the fact that they are full of sadness and pessimism and there’s something that’s not ‘natural’ about them. She takes this opportunity to become rich, famous and starts selling and exhibiting these paintings in partnership with Rhonda (who blackmails Josephina to share the exploits with her from some unknown dead man’s work).

Soon after seeing these mysterious paintings, Morf starts to try find more about its owner’s background. He came to know that the deceased was named Vetril Dease–who had a terrible sadistic, shady past. Everything is going well till people start dying in unexplained and mysterious manner. Morf finds out that there’s something common with all these deaths–they all were making money from Vetril Dease’s work despite the latter explicitly telling his apartment owners to burn all his work after his death.

Morf tries to convince Rhonda to stop selling and exhibiting this cursed/haunted work. But out of greed, she didn’t pay heed to him. In the climax, she understands the fact that some ghost/spirit/spell/curse is accompanying these paintings and she gets rid of them. But she couldn’t get rid of the inevitable and dies mysteriously as all others who made money of Dease’s work.

My Rating & Verdict of Velvet Buzzsaw

Rating this movie 7/10. There are frightening moments and decent emotional scenes, but the overall experience of Velvet Buzzsaw movie is nothing more than what can be described as “just above average”. I seriously believe that not telling more about the Vetril Dease’s spirit/ghost in the movie was a big mistake that pulled the film down a few notches.

In my view, lower your expectations because it’s kind of disappointing. Velvet Buzzsaw movie doesn’t fulfill the potential of the characters or the story.