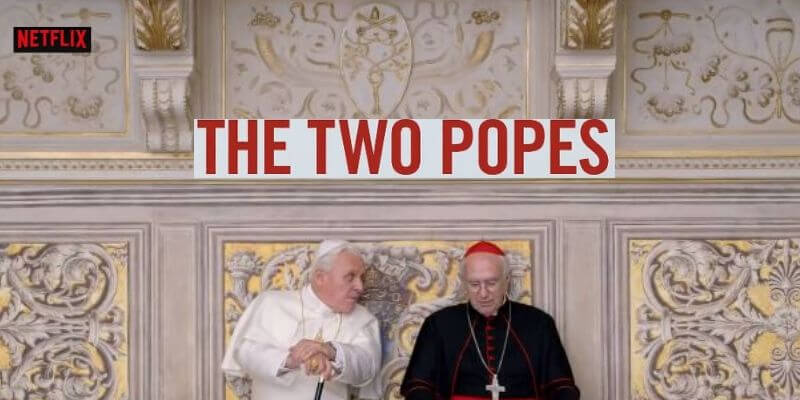 It’s so humbling to watch the most powerful man on earth.. The Pope. For most of the length you forget it’s a movie and I am not even a Christian (Now I can relate to all those who lit agarbattis for the TV serial Ramayana).

Though Anthony Hopkins as Pope Benedict is the bigger of the two, both the role and the actor. It’s Jonathan Pryce as Cardinal Bergoglio and later Pope Francis who steals your heart and the show. The film does not demystify the Papal secrecy instead makes forgiveness and  sacrament clearer.

Would help to know a little back on the political situation of Argentina in 1976 to better understand The Cardinal’s shift to becoming a Jesuit and then his move to the Catholic Church.

It’s The Two Popes walk in the garden of the Summer residence that takes their relationship from indifference to the warmth of an unlikely friendship. It’s the discussions on God & Christ, TV shows, Football and later even a shared pizza that makes the Pope human to us. I was thrilled The Two Popes personal favorites are ABBA & Classical music.

The inclusion of the Vatican leaks was a huge surprise as was the touching scene of absolution of the Pope by the then still Cardinal shot in the Room of Tears at the Sistine Chapel. It’s the scene where Pope Francis refuses the red mozzetta, rochet, gold pectoral cross, and chooses to wear only the white cassock and his own pectoral cross to appear on the balcony that you feel closest and understand the mass hysteria.

I couldn’t take my eyes of the frescoes, the paintings in The Sistine Chapel, the creations of The Masters. I rewound  many scenes repeatedly to choose audio or visuals not wanting to divide my attention.

The movie calls for serious thought on Change v/s Compromise.