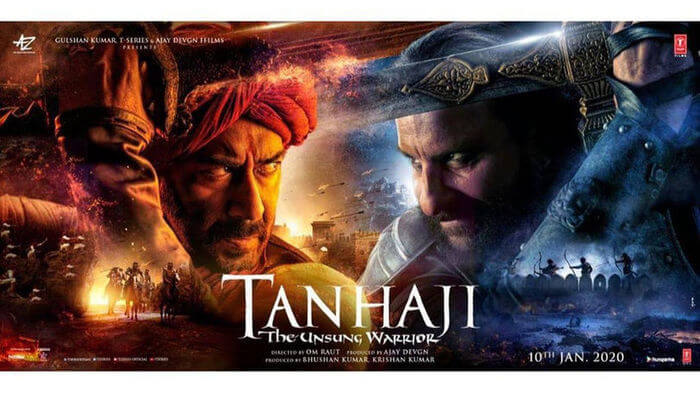 Tanhaji – The unsung warrior is an epic drama portraying the life of Tanhaji Malusare, a military general of the Maratha king Chhatrapati Shivaji. Tanhaji Malusare (Ajay Devgn) is renowned for leading the battle of Kondhana against the Rajput Udaybhan Rathore (Saif Ali Khan) and giving his life for the capture of the fortress. With a stellar cast of Ajay Devgan, Saif Ali Khan and Kajol, the film is shot aesthetically with eye-catching graphics and brilliant cinematography and was a major blockbuster in Bollywood.

Chhatrapati Shivaji was a Maratha king who had a vision of a unified independent India. He is well known for his guerilla warfare against the Mughal emperor Aurangzeb. He creates trouble for Aurangzeb repeatedly and is the main blockade stopping him to take over central and south India. Aurangzeb plots a surprise attack on Shivaji and forces him to surrender. Shivaji, in a desperate bid to negotiate, surrenders 23 of his fortresses, including the formidable fortress of Kondhana to Aurangzeb.

The shrewd Aurangzeb, in a plot to spite one Indian against another, sends his loyal trustworthy servant Udaybhan Rathore, a Rajput as a fort keeper of Kondhana and intends to declare Kondhana as the capital of the south.

Udaybhan Rathore, deftly played by Saif Ali Khan, is portrayed as an evil character full of lust, greed and power. He does not hesitate to kill the Marathas or his own soldiers who fail their duty, mercilessly. He is backed by the cannon Nagin, sent by Aurangzeb which can shoot long distances and is capable of causing severe massacre in the Maratha Empire.

When Shivaji comes to know about Udaybhan’s arrival, he plans to launch a counter attack to stop him from entering Kondhana. He is hesitant to involve his trusted general and childhood friend Tanhaji (played by Ajay Devgn) in this attack as the latter is busy with his son’s wedding preparations.

Tanhaji comes to know about this campaign and coerces Shivaji to let him lead the attack. His wife, Savitri Bai (played by Kajol), supports him in all his decisions and encourages him to fight the battle.

Tanhaji waits for Udaybhan in the Ghats and is prepared to launch a guerilla attack on him but Udaybhan foils his plan and escapes through an alternate route to arrive at Kondhana. He hoists the Mughal flag and stages Naagin on top of the fort to ready for the attack on other Maratha provinces.

Tanhaji then dares to get captured by Udaybhan to do a due reconnaissance of the Kondhana fort, the enemy strength and its secret doors. He then assembles an army of three hundred troops and plans to climb the Kondhana fort in the night and launch a guerilla attack on Udaybhan’s army.  This climb and capture are well known in history, especially for the use of Ghorpads (A monitor lizard) which was used to climb the steep walls of the fort.

After climbing, a fierce battle ensues. Tanhaji slays Udaybhan and sacrifices his own life, thus ensuring the victory of Marathas over Kondhana. The fort, regained by the Marathas and freed from the Mughal clutches, again becomes a formidable barrier making it impossible for   Aurangzeb to infiltrate Deccan.

Hence this battle of Kondhana is considered one of the most strategic victories of Marathas over the Mughals.

The film is brilliantly shot with lavish settings and costumes. The cinematography is brilliant and 3D effects are used in abundance. The actors dive into the skin of the characters and have done a brilliant job. Ajay Devgan is majestic as Tanhaji and Saif Ali Khan is as devilish as he can be as the evil Udaybhan Rathore. Kajol is immaculate as ever, gentle and soothing. Sharad Kelkar excels and slips into the role of Chhatrapati Shivaji very comfortably.

The movie with its liberal use of graphics is a visual treat. It is certainly a magnum opus and deserves all its accolades.

Check out Our Collection of Historical Movies

There are however certain points which have to be put forward considering it is a retelling of a historic incident. It is a well-known fact that after a series of wars with Mughals, Rajputs made peace with them. And with the assistance of Rajputs, Mughals expanded their influence in the whole of Northern India. Even when the Marathas opposed them staunchly from the center, Aurangzeb liberally used the help of Rajput kings to resist the attacks.

Udaybhan Rathore was one trusted Rajput general in the army of Jai Singh – I, a trusted aide of the Mughals in the times of Shahjahan and Aurangzeb. So, he was not an evil person, but a general doing his job as asked by his king. It would have been good to bring out the Rajput aspect in the movie rather than show Udaybhan as a banished general seeking personal vendetta for his forbidden love against his own country.

Some liberties could be taken in depicting history but such huge demarcation from the actual facts makes the critics question the authenticity of the film.

The plot is severely sabotaged, showing Udaybhan as a lovelorn Rajput general fighting to claim back his unrequited love, a Rajput princess who rejects him for his social status. He vows to claim her back and sets forth to combine hands with Aurangzeb. He then stabs his own king, kidnaps his love against her wishes from her husband’s funeral pyre and keeps her captive till she bends to his will.

Her brother infiltrates Udaybhan’s army as a mole and helps Malusare in his surprise attack. The whole made up plot looks fragile and weak.

To summarize, it is good to see historic dramas being made to showcase certain important aspects of Indian history. The Maratha resistance to the Mughal rule is one of the very key chapters in the Indian history and the capture of Kondhana fort was a strategic victory to the Marathas to uphold their resistance against the Mughals. But I would have preferred it if it had focused more on the capture, the battle and the rivalry between the Mughals and the Marathas rather than a make-believe typical Bollywood villain.

Definitely a must watch, but do cross check your history facts before giving it to the misconceptions!