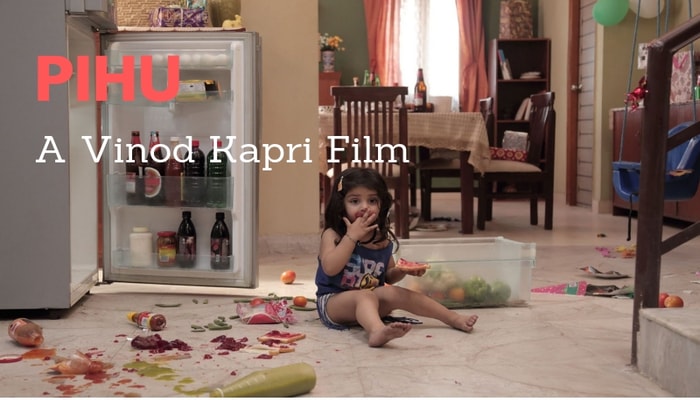 Pihu is less a movie and more like a documentary. It is a story about a 2 year old girl who becomes a victim of her parents domestic dispute. The mother commits suicide the following night of Pihu’s birthday, while the father is shown away from home for work. The girl wakes up to a dead mother on bed, who she continuously tries to wake up.

The story shows the urban way of living where people have subdued themselves to nuclear families and maintaining privacy. They have less interactions in neighborhood and have slim idea of what’s happening around them in the society.

The movie is heart wrenching, scary, depressing and empathetic. Instead of intriguing you to see more, it rather leaves you with feeling of ‘No More’. The only people visible in the movie are dead mother and the little girl Pihu (Pihu Myra Vishwakarma). Besides that you will only hear the voices. Pihu looks adorable and sweet. Hats off to director for getting act done by this little girl.

The movie took part in many film festivals around the world and was critically acclaimed for direction, screenplay and acting. The film was awarded Grand Prize for Best Feature Film in the International Category as well as the People’s Choice award for Best Film in the 14th Trans-Saharan International Film Festival held in Zagora, Morocco.