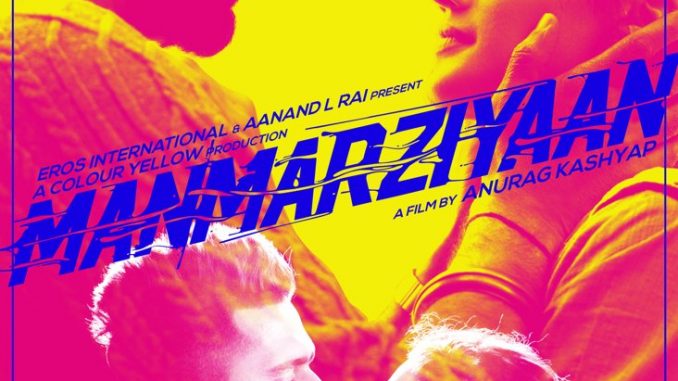 Director Anurag Kashyap has drifted from Dark, Gaalis and Golis with the love triangle of Manmarziyaan.

Taapsee Pannu as Rummi, the hot headed kudi who manipulates her family constantly. She speaks volumes with her eyes, body language and vocals, engages you for all of the 157 mins. Vicky Kaushal as Vicky the DJ kills it with his muscular and juvenile irresponsible lover boy looks. Vicky jumps over across the rooftops to meet his lady love for some fierce love making. They crave sex.. ‘this isn’t love you idiots’, you want to yell. Shown well without being vulgar and bordering on intense, but just falling short of getting the A rating.

Enter Robbie, Abhishek Bachchan as the middle class banker from London seeking homely wife with his mother’s blessings. Expressive in his silence and blessed with patience and maturity to handle this bomb, Rummi He tolerates her rudeness, indecisiveness and supports her madness only because he has fallen in love. Even encourages her to think things through and discuss if she should walk out on her marriage to return to her boyfriend. You wonder if this is typical or is it just the reel world.

A better grip of Punjabi or even subtitles would surely have helped, especially to enjoy the 12 full bodied punju accented songs!

The star cast needs individual mention for each has emoted excellently but then my review will be as lengthy as the movie itself! Vikram Kochhar as Robbie’s bro and the dialogues with his parents are hilarious.

My Rating of Manmarziyaan Movie:

Kudos to the director and cameraman for the closeups of exhalation and vulnerability captured perfectly!

So why wouldn’t I give Manmarziyaan movie a 5 on 5? Cause it falls short on showing the emotions of the family at Rummi changing her mind twice about marriage, later no one helps them even try to reconcile, they just allow them to annul the marriage . There is no continuity in some scenes like the bags that return from London(when did they get sent). The talented dancing twins that pop up without context is a little ridiculous. Switching to animals mating rituals on TV is as bad as covering up sex scenes with flowers in old Bollywood movies.

Though what is sensitively shown is how Robbie takes off his pagdi for a smoke and respectfully picks up the roti that’s fallen on the floor. Rummi’s connection with her Grandfather and Vicky’s Father’s moral lecture to him when he is trying to break up a wedding has been handled well.

You come away from the movie wanting to legalise the marriageable age in India to a sensible 25 and above. Or allow marriage only when both the bride and groom are financially independent and can tell carnal pleasure from real emotions!