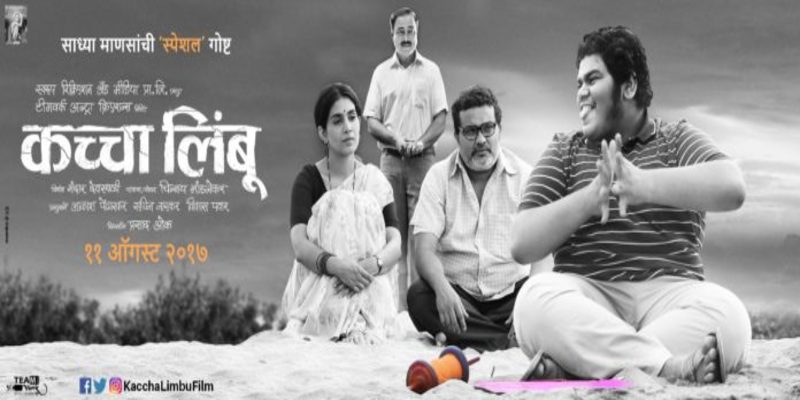 Superb! A bold movie which grips the audience with a remarkable cast, brilliant script, and direction. I must say after watching so many Marathi movies look like it’s golden days back for Marathi film industry for sure. If you are among those who are looking for real cinema then this one’s for you.

Saying this Kaccha Limbu is based on Jaywant Dalvi’s novel Runanubandh. This film is adapted to silver screen by Chinmay Mandelker (one of my favorite writers). The movie straight away takes us to Mohan Katdare’s life. Mr. Katdare and his wife Shailaa–a simple middle-class couple who are taking care of their son Bacchu (Manmeet Pem), who is a mentally challenged boy.

The couple’s life is in a mess as they are barely managing their house and looking after the boy with special needs. As the son reaches adolescence, he starts struggling with the new transformation in his body with his growing age. Mr. Katdare usually worked in the night shift and Shaila in the morning.  Amidst mundanities of everyday life, they had lost their meaning and color of life which is beautifully shown by the black and white tone of the movie.

There are two more characters worth mentioning in the movie: Shrikant Pandit (Sachin Khedekar) Shaila’s boss, a pleasant man who is trying his best to get the couple to come together and seek their happiness; and Venkat (Mahadevan) Mr. Katdare’s only friend with whom he can share his feelings.

While routine life is going on, things take an ugly turn when Bacchu’s adolescent hormones start kicking and he gropes his own mother one night. This happens twice and the couple gets fed up with the daily struggle and start having mixed feelings towards their only son.

It’s learning the hard way for the Katdare family to accept the fact and find their way to happiness. Shaila starts finding comfort in her boss. On the other side, Mr. Katdare is busy saving up for a trust they called  ‘Bacchu Fund’ for Bacchu’s afterlife and for parents who are in the same situation as them.

With no songs in the film, debutant director, Prasad Oak makes sure that the story keeps us hooked to the seat till the very end. The entire movie is shot in black and white which shows lost hope and color shade perfectly suits the gray shades of the storyline. It is no surprise that it has been released in Marathi cinema. Hats off to Prasad Oak to take a such a sensitive subject in his debut movie and presenting it in a very sensible way.

A perfect story with no glitches in performances, especially Manmeet Pem is laudable. His act of a mentally disabled teenager makes you believe in the character. Sonali Kulkarni pulled her complex role very thoroughly and Ravi Jadhav (debut actor) couldn’t even have thought that a very popular Director by profession can act like a pro.

Directed and Written by: Prasad Oak