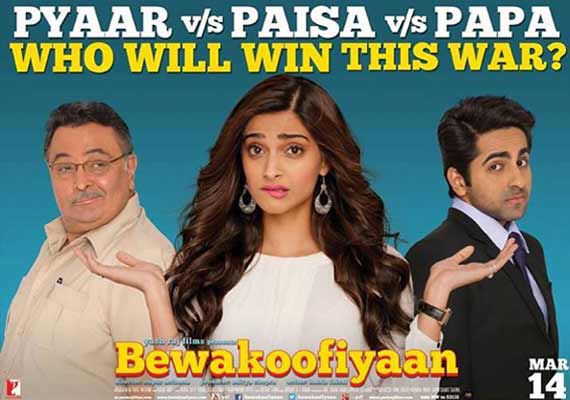 Every now and then we come across a movie that is not very successful and yet it proves a good stuff to watch. Bewakoofiyaan is one such movie that is not a “commercial hit” neither it was appreciated by masses. But, I found it very good as well as “close to life” movie. Bewakoofiyaan is a modern Indian film that tells about the complex lifestyle of our youth living in big cities and the ups and downs they through it. Mohit (Ayushmann Khurrana) and Mayera (Sonam Kapoor) are in love with each other and they are planning to get married. The only issue is Mayera’s father Mr.V.K. Sehgal ( A High Ranking Government Official). Mohit is expecting a good promotion at job and Mayera asks him to talk to her father about their marriage. One day they go to a picnic where Mohit tells V.K.Sehgal (Rishi Kapoor) that he loves Mayera.

Mr.Sehgal gets angry and soon leave the place with his daughter. Later he tells her daughter that he will not let her marry that “middle class” guy. Mayera also tells him that she will not marry anyone except Mohit.

Now, Mr. Sehgal visits Mohit at his office and gives him an ultimatum whereby he will check his “eligibility” for her daughter and if, Mohit fails in this test he will have to forget Mayera forever. Meanwhile, after getting promoted just a few days ago Mohit loses his job as his company goes through a crisis and fires many employees as part of the austerity measures. Now, Mohit faces a dilemma to pretend to Mr. Sehgal that he is not fired and still works at his office. On the other hand, he also has to help his would-be father-in-law to get a new job (as he is retired from his Govt job and wants to do something for earning money as well as passing his time). Amidst all this Mohit is unable to get a new job and soon ran out of money (as during his hay days he didn’t manage his expenses well and had no substantial savings too). He asks help from Mayera for his expenses and installments. She gladly comes to his rescue and everything is going on track except that Mohit is losing his patience as well as confidence every day he goes through without a job. As a result, after some time their relationship gets strained as Mohit and Mayera get into an argument over his joblessness. After this, they decide to call it off and Mohit sells his car to return Mayera’s money. Mayera leaves for Dubai while Mohit takes up a small job at a cafe. Mr. Sehgal gets hurt seeing this as in his heart he has accepted Mohit as his son-in-law. The climax of Bewakoofiyaan involves how V.K. Sehgal again gets Mayera and Mohit together. While doing so he himself gets a job as a CEO in a company.

My Rating & Verdict of Bewakoofiyaan:

I rated Bewakoofiyaan 9 out of 10, this film has everything a movie lover would love to watch. The only thing that wasn’t good about this film or at least that I didn’t love was its songs. They are okay to listen but not something to remember forever. Bewakoofiyaan is a movie that is very close to today’s reality. It’s a funny romantic drama with some good acting by Rishi Kapoor, Ayushmann Khurrana and Sonam Kapoor. One a boring weekend Bewakoofiyaan is a perfect Bollywood Masala Film to watch. So, add it to your watchlist and see whenever you want to…!

Thanks for reading this review and stay tuned for many more reviews coming your way!