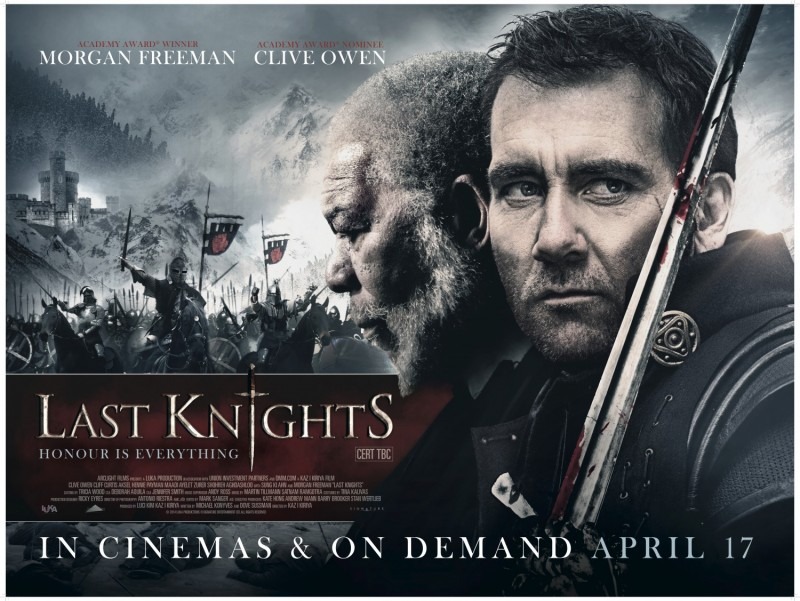 Kazuaki Kiriya may  not have directed a “great” film till now, but still Last Knights in my view is an entertaining one. Last Knights boasts a long list of promising actors from different countries. It has a good, if not the  best plot for a Medieval History based movie. The background score is fine, not something I will talk about specifically as I normally do. Last Knight has twists and turns that are just enough to make you feel good about it. Talking about the “Critical Appreciation”, I think Last Knights is very harshly dealt by the critics all over the world. This movie is not bad as its ratings are by the critics. I have seen far worse movies than this and they have decent ratings too from the critics.

Anyways, let’s talk about the storyline of Last Knights. This film is nothing but a story of HONOR, first lost and then regained. Talking of honor as “everything” in this age may sound little absurd, but there was indeed a time when honor was a very valuable thing for people. Commander Raiden (Clive Owen) loses his master Lord Bartok (Morgan Freeman). Actually, Raiden himself has to behead his master (This is something you guys need to find out why?). After it, on the orders of the Emperor (Peyman Moaadi), the Bartok lands are being confiscated by the empire and Raiden alongside many Bartok clan people has to leave his home. All this happened because of a greedy minister Geeza Mott (Aksel Hennie) who wanted to make himself rich by asking bribes from all the vassal states of the empire which Lord Bartok opposed public for which he had to pay a heavy price.

The movie moves forward when Gizza Mott becomes obsessed with Raiden, that he is not going to sit idle and will take his vengeance. For over a year he follows Raiden and his fellow legionnaires, but after getting no indication of him planning an attack decides to leave this issue. In the meantime, Gizza Mott has fortified his palace with more security than even the emperor himself.

Now, comes an interesting twist in the plot when it is revealed that for over a year Raiden and his followers are actually acting to “deceive” Gizza Mott and his men knowing that they are being watched every second throughout the day. And, now when they have finally outwitted their enemy. It is time to launch an offensive, I am not revealing its details as it is something very interesting and to me the “USP” of Last Knights. After a gruesome battle at the palace of Gizza Mott who has now become the first council to the emperor commander Raiden kills him. After this Raiden surrenders himself to the Emperor. When the Emperor (after consulting the nobility) declares Bartok rebels as National Heroes but announces that the act of violence against the first council is similar to the attack against the Emperor himself and, therefore, the leader i.e. Commander Raiden must be put to death. The movie ends with Raiden on his knees ready for his punishment of getting behead and suddenly there is a flashback….

My Verdict & Rating of Last Knights:

I gave this film 7 out of 10 only. The reason is that if Last Knights had to become an epic it must have been much longer than what it is. Everything is done very well, but then suddenly you feel that it could have been done in a more detailed manner, especially the later part of the story. One more thing was not very convincing about Last Knights was its music and background score that wasn’t great as I always expect from a Medieval History theme-based film. But, in any manner, this is not a “bad movie” at all as many of the leading movie critics want us to believe. I strongly recommend it to every history genre movie lover and I am dead sure you all will love it. It has its own share of twists and turns, although I agree that story is not that strong. The last thing I want to mention especially for the History Lovers is that this movie has nothing to do with history. Last Knights is purely a work of fiction, so don’t relate it to anything in history just watch it and enjoy it.

Thanks! for reading this review and always stay tuned for more. You can suggest movies on which you would love to see me write a review on our Facebook Page.