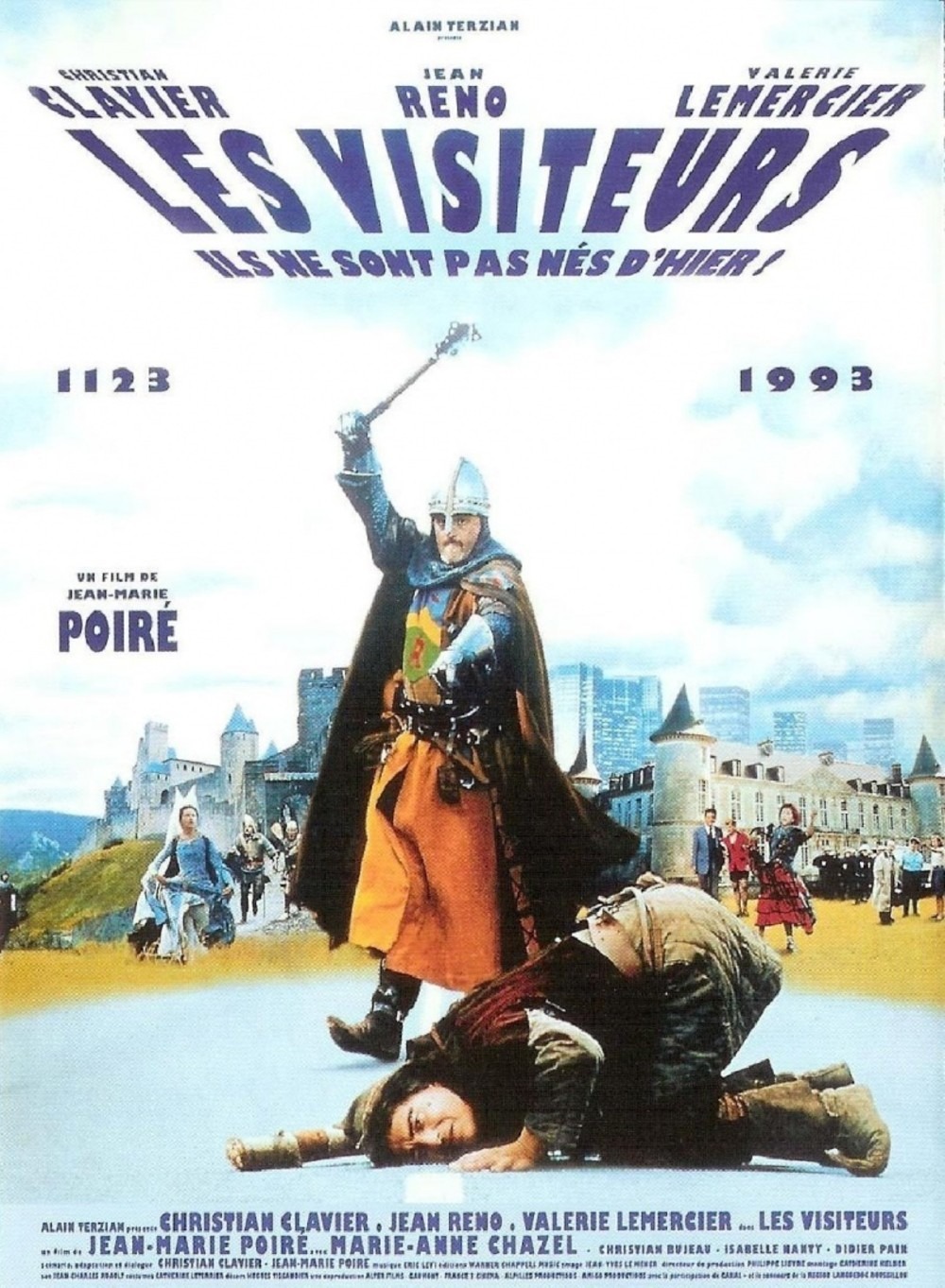 Les Visiteurs is a comedy movie based on “time traveling”. The movie is set in early 12th and late 20th centuries. It is 1123 and a brave Knight named Godefroy Amaury de Malfête saves his King’s  (Louis VI “Le Gros”) life. For his “extra ordinary” feat King gives him the title of  Count of Montmirail. He also gives him permission to marry the woman he for long fancied. Here, comes the tragedy in the life of Godefroy as under the spell of a potion he “accidentally” kills his would be father-in-law. Frénégonde de Pouille (the countess with whom he was about to marry) tells him that she can’t marry a person who made her orphan. This makes Godefroy very sad he also decides not to marry anyone else all his life. After this, Godefroy goes to a  wizard named Eusebius and asks him if he can bring back his father-in-law? The wizard replies indeed he can’t, but he can sent him through the “tunnels of time” from where he can stop himself from shooting (with a crossbow arrow) his father-in-law.

Eusebius gives him a “magic potion” upon drinking of which Godefroy along-with his valet Jacquouille la Fripouille by wizard’s mistake comes into the year 1993. Here, starts the real drama of Les Visiteurs as they gets confused seeing the modern world with latest technologies and mistake them for “devil’s machines”. After reaching the 1993, Godefroy and Jacquouille la Fripouille encounters police and fights with them. Godefroy is taken to a mental asylum while Jacquouille meets a vagabond called Ginette la clocharde (Marie-Anne Chazel).

The twist comes when Godefroy meets Béatrice de Montmirail (who is exactly same as Frénégonde). Beatrice thinks of Godefroy as her long-lost cousin Hubert and takes him from asylum to her home. At home Jacquouille (Christian Clavier) do some stupid stuff which is something worth watching with your own eyes rather than me narrating it to you. Soon, Godefroy realize that Beatrice is his “descendant” and he has come to future. Now, he gets worried about going back to is time. He asks Beatrice to take him to his castle (which is now turned into a heritage hotel) run by a man Jacques-Henri Jacquard (who looks like Jacquouille because of being his descendant). In the castle, Godefroy finds the secret passage he was looking for going back to his time. How will he and Jacquouille return to 1123 again ? Is something you need to find out by watching Les Visiteurs. I would like to disclose one thing that Les Visiteurs ends when Godefroy corrects his mistake of shooting his would be father-in-law, but Jacquouille remains in the year 1993 instead he tricked everyone to send Jaquard back to past…

In my assessment Les Visiteurs (The Visitors) is worthy of  7/10 rating. Les Visiteurs is a good to watch “one-time” stuff, but never a complete cinema as anyone would love to see. The film relies heavily on two lead characters and the music too is not very pleasing. In fact, as for my liking there was very “dim and light background score” in Les Visiteurs. Coming to special effects, it is very much clear that the movie is old and as a viewer of today’s age to me they seemed very “ordinary”. At last, I would recommend it to all age groups as it is a funny film to enjoy either with your friends or family.

Thanks for your love and support to The World of Movies. Stay tuned for more….!