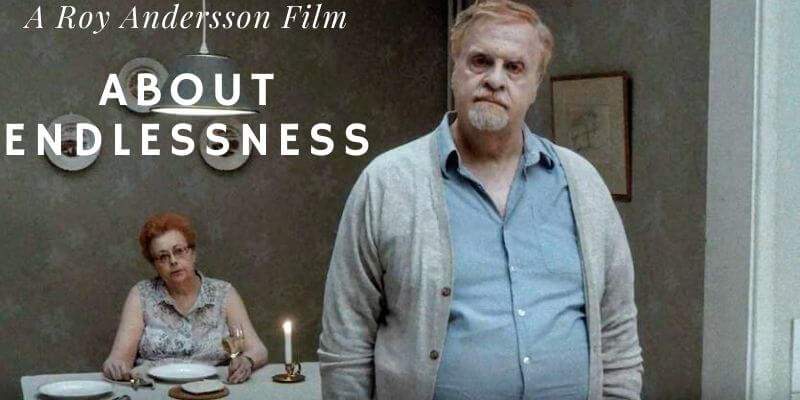 What the film is about?

About Endlessness is quite a unique movie. I haven’t watched such a movie till now. I am in a fix whether to call it a movie or not? The movie has no major characters, a central premise, or even a climax. All it has is over a dozen short scenes conveying various life messages to the audience.

I watched this film in the ongoing 18th Pune International Film Festival as part of its Global Cinema section. There are so many scenes in About Endlessness that I don’t remember all of them now. Anyway, I will try to write about those that I do remember and feel was really good.

Scene About A Man Consumed With Jealousy

A man meets his old schoolmate after ages. Although he recognizes his classmate, the classmate didn’t. It turns out that the classmate was once brutally beaten by our protagonist of the scene.

In the end, we come to know that our protagonist’s real cause of worry is the fact that his “dumb” classmate has acquired a PhD. and living a good respectable life. We also come to know that our protagonist also has achieved a lot of things in his including many foreign trips. But still, he was more worried about the fact that his not so bright classmate has a PhD.

The Lesson: The scene portrays the most common of human errors: Jealousy of others’ success.

Scene About A Man Who Wanted To Conquer The World

I am not convinced about this scene. It depicts Hitler’s office in shambles as the Allied powers keep on bombing Berlin. Fuhrer is shown for a few seconds and it seems that he has accepted the inevitable. This is the end of the scene.

The reason that I am not convinced of this scene is the fact that Hitler’s aim was never to conquer the world. I don’t know why the Director wants us to feel that way?

Scene About A Man Who Doesn’t Know What He Wants?

In this scene, an old man sitting in a tram or a train suddenly starts crying. When people try to ask, he answers: I don’t know what I want? He repeats this thrice.

Upon hearing this, another old man recommends that he could have stayed at home with his misery. While a woman supports the crying man saying that he has every right to cry anywhere he wants to.

The Lesson: Not everyone is going to understand and support you in your misery.

Scene About A Man Who Has Lost His Faith

A man (Catholic Priest) is having nightmares where he is being crucified. He decides to consult a Doctor (surprisingly, not a psychiatrist). Unfortunately for him, the Doctor is unable to understand him and asks him to come next week. But the Priest returns to the clinic before the next week saying that “What should I do now that I have lost my faith?”.

Without giving heed to him, the receptionist and the Doctor throw him out of the clinic saying that they are about to close.

The Lesson: Once your faith in God or God’s existence wavers, there’s nothing you can do about it. Moreover, even others too can’t help you with that.

My Rating & Verdict of About Endlessness Movie

To be frank, except at a couple of places, I am largely disappointed with this film. Giving strong messages in short scenes of 2-4 minutes may work for the European audience. But as far as the Indian audience is concerned, I don’t feel the same. I am giving About Endlessness 7 out of 10.

I only recommend this film to those who have a real penchant for European or Scandinavian cinema. The kind of humor and other elements present in the film may not be comprehensible for all kinds of audiences.