12 Angry Men: 12 Thinking Heads That Are Often Found in Meetings 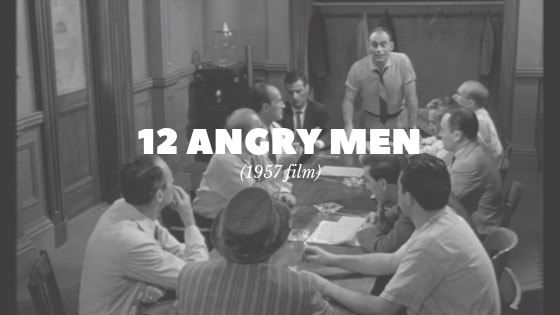 12 Angry Men is a Hollywood movie released in 1957. Before I offer you to read what you landed here for, let me run you through the fundamental details of the movie. It is an American black and white courtroom drama film. The movie shows a jury of twelve men who are entitled to assist the court in giving the final verdict of a murder case.

In the case, an 18-year old boy is allegedly accused of killing his father. Though an attorney with the help of evidences confirms the son the culprit, the justice calls for a jury to have further discussion over the case.  None of the jurors has any association either with the court or the subjects of the case. On top of it, the intriguing fact is that, all of them are strangers to each other.

In a closed room, they begin to discuss about the case to figure out whether the defendant is guilty or not guilty.

Let’s enter the jury room and know how the jurors while discussing about the case resemble with the thinking heads that we often come across in our official and unofficial meetings.

1.The one who leads the meeting

This thinking head is the most courageous one, who either declares himself a leader or accepts the position. He, in every condition makes sure the discussion remains on the track and serves the purpose. He is calm, patient and unbiased to everyone.

2. The one who is not a leader, but wants others to listen to him

He is the attention seeker who drills his opinions in others’ heads. He is not a leader, but wants to be the self-proclaimed one. Moreover, he has features opposite to that of the leader’s – he is aggressive, impatient, and has no empty room in his head to accommodate and process others’ ideas.

3. The one who questions the leader’s job

He is not concerned about the real agenda of the meeting, but the leadership skills of the leader. He often disapproves the leader’s choice, without giving any justifiable alternatives. He is disinterested in the leader’s position, but on the contrary, he unnecessarily whines in following him.

4. The one who is a wordsmith, calm and polite and handles arguments wisely

This one is everybody’s friend. He, in the argumentative situations, when the leader fails do his job, handles the rein with his wisdom and polite behavior.

5. The one who drags people’s attention toward his personal interests

You can count his presence, but will seldom have a chance of counting his opinions or thoughts. He doesn’t participate in the discussions, whereas creates annoyance and hampers the discussion by diverting people’s attention toward other irrelevant matters of his interest.

6. The one who makes fun of everything

He is the another annoying element who you hope should leave the meeting room. He cracks jokes that nobody finds funny.

7. The one who is too lazy to think- his only motive is to show his presence in the discussion

He is the least bothered person in the group. He follows the decision that is approved by the majority. When  you probe him for his opinions, he often opts to remain quiet or pass it simply by saying, “I don’t know”. Thinking is not his cup of tea.

8. The one who asks smart questions

This is one of the significant personnel in the room. His tendency to dig out the details by asking questions truly help in rolling out the final decision. This curious head compels the rest others to think and keep them on the right track.

9. The one who thinks out of the box

The one whose opinions in the beginning are often rejected as others do not envision points that he puts forth. He starts by creating reasonable doubts in others’ heads. He performs demonstrations and experiments and eventually, ends up receiving votes supporting his thoughts or ideas from all those who initially disapproved him.

10. The one who is confused and gets convinced easily

He is similar to the lazy thinking head, the only difference is – he puts efforts in thinking but can not make judgments and so he tends to change his party.

11. There is the one who is adamant to his opinions

This one doesn’t find any reason to follow others. In his head, he is the Mr. right who the rest others ought to follow. His impudent behavior makes people neglect him; his only  supporter sits second in this list.

12. The one who observes and analyses the situation and makes his point

He doesn’t participates in conversation often but, speaks when he thinks he needs to. He shares unique ideas and receives appreciation for his trait. In any meeting, when he doesn’t speak out, you might’ve noticed the leader probing him to share his suggestion before he concludes the meeting.

This is our list of 12 thinking heads that we think resemble with those 12 Angry Men in the movie. If you have watched the movie or making you mind to watch it, do share what you think about them in the comment section below.