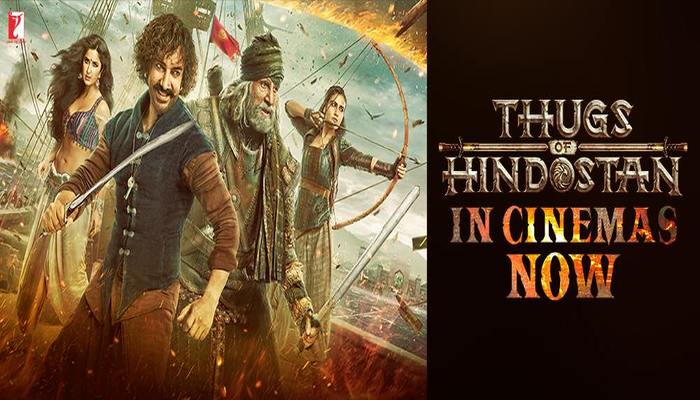 The Big Question Dekhen Ya Nahin?

Dekho! For the exquisite settings, larger than life drama and perfect cinematography. Every rope in place, every cloud with perfect colouring and the period costume such a welcome change from the glam and glitter of YRF films.

Amitabh Bachchan as Azad, not just a title but an inspiration of freedom and the rebel princess, Fatima Shaikh set up their hideout in North India by the ocean and no amount of artistic license allows you to digest this geographic impossibility. Ila Arun as the medicine woman who doesn’t always get her potions right is barely funny.

One fleeting scene with the good looking thugs of the 1700s barely shows the horrors they wrought.

Aamir Khan can’t make up his mind and neither will you, whether he is a good guy or bad. The curly hair and nose pin adds the swag that he lights up the screen with.

Aamir and his friend, Zeeshan Ayub’s comic timing not being bang on is disappointing though. Katrina Kaif as Suraiya Jaan with the exotic looks is the ultimate letdown as she just does not fit in with her glitzy costumes and jhatak phatak dance moves as a 18th century nautch girl.

Perhaps remix or mashup of multiple movies and themes would be better suited descriptions. You can play a guessing game of ‘which movie..which movie’ for every scene.

Wonder what director, Vijay Krishna Acharya really had in mind. Epic or fantasy? It’s sad that the stars are bigger than the story which seems to sink steadily right from the start.