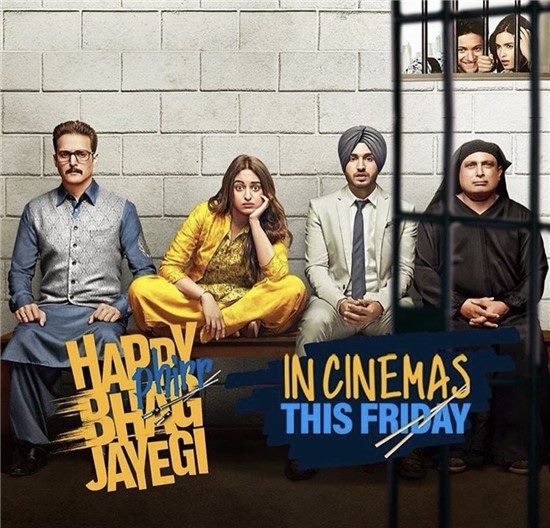 You watch a sequel with expectations.. Best not to with this one as though it holds its own & cracks you up for a bit.. It’s not as smooth as the prequel (Happy Bhaag Jayegi).

Though she was present in this one, I still missed Diana Penty and the Abhay Deol charm from the prequel.

Sonakshi Sinha as the punjabi kudi almost steals the show with her one liners and dance moves but not quite. She is unable to keep pace. Would have loved to hear a little more technical gyaan from a horticulturist though.

Jimmy Shergill and Piyush Mishra’s timing is bang on as is their Indo-Pak comic banter.

Jassi Gill’s good looks are obvious even through his pagdi and beard. Introducing him as a loser and bad karaoke singer was so not needed.

Diana Penty and Ali Fazal hardly have a role, except as a connection to the prequel.

Fa Q, Adnan Chow, and Chang are Hindi speaking Chinese characters who only brought the movie down. Most of the Happy Phirr Bhaag Jayegi movie is in China and typically makes fun of their police/prison system in bad taste.

The whole kidnapping and mix up is due to the common name the two girls share. The plot which is a roundabout chase to reach the Pakistani politician’s son is so far fetched that it leaves you wondering where the story began.

You leave the theater having laughed, but the joke is on us, as its obvious we have such little choice in good cinema, especially the comedy genre in our Hindi film industry.