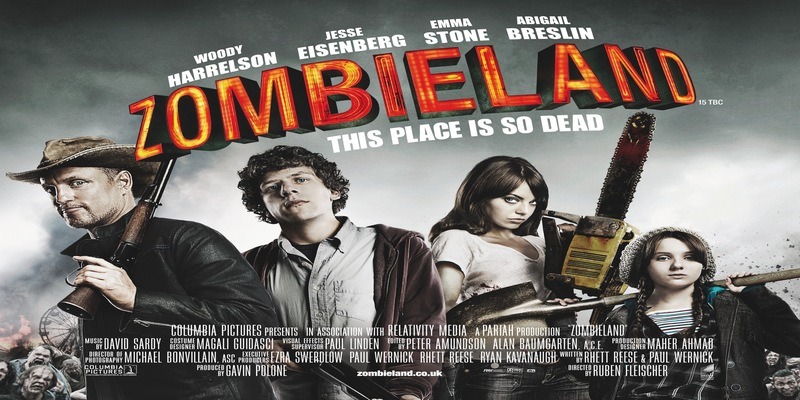 What to expect from the movie?

Right off the bat, the characters, the setting, and the music give the audience an excellent film. Ruben Fleischer has finely directed Zombieland to give us the best of the horror-comedy genre. The movie is a pure no-brainer throughout its brisk 88 minutes run time. It is a story of four people who are trying to escape zombies after a plague turned U.S into a Zombieland. The film has a subtle taste of humor, which I enjoyed too much. There are many instances where you end up laughing unconsciously.

Before writing anything about the movie I want to tell you all that I am not at all a fan of zombie movies. In fact, for me, there’s nothing more disgusting than a zombie movie. But in the case of the Zombieland movie, it was the presence of Jesse Eisenberg that prompted me to watch it. After watching, I feel like sharing my review of Zombieland movie with you.

Columbus (Jesse Eisenberg) is a student who is left alone in his place after a virus plagued the whole region. The only reason he managed to escape the virus was by following his ‘rules’. His rules are something that you must focus on to enjoy this movie to the fullest, I am not going to ruin your excitement here. Columbus meets a ‘tough man’ named Tallahassee (Woody Harrelson). There’s something peculiar about Tallahassee: he loves killing zombies. Columbus tells him that he is going to his hometown in Ohio to see if his parents are still alive. He asks Tallahassee to give him a ride to Ohio. Tallahassee obliges but on one condition: he wants to eat Twinkies and for that, he can take any risk. Later on, both meet a girl, who along with her little sister cheats them and take their Cadillac Escalade.

After being cheated they find a better vehicle, a Hummer H2 loaded with weapons. Again, the duo encounters the sisters and once more they make a fool of them. This time though the sisters decide to travel with them in the Hummer H2. During the drive, the four becomes friendly with each other and Columbus feels attracted to Wichita (Emma Stone). All four of them reach Los Angeles and take shelter in Bill Murray’s mansion. Suddenly, Bill Murray comes up and that too in a zombie get up. He tells Tallahassee and Wichita that zombies don’t attack their lookalikes, so he too made his get up like that of a zombie. Bill tries to do a prank with Columbus, but he freaks out ends up accidentally killing him. After this, they throw away the body of Bill out of the mansion and have some fun playing games together.

The next day, Wichita alongside her sister Little Rock leaves the mansion for Pacific Playland. At the Pacific Playland, the sisters are attacked by a big group of zombies. They were about to become prey of zombies until Columbus and Tallahassee arrive to save them. The movie ends hereafter they kill all the zombies and decide to remain together.

Well, talking about Jesse I would say that I am a little biased. I am such a huge fan of this guy that it’s very difficult for me to say anything negative about him. Jesse as Columbus is rocking. You always feel from where he brings so much humor with that poker face? The whole movie has some awesome one-liners by Columbus that anyone would love to laugh about. Jesse has given his best in this film as he quite often does in every role he plays. For me, he carried the whole film over his shoulders.

The others too have done a fair job especially Woody Harrelson as Tallahassee. Bill Murray’s cameo in the film looked a bit odd, but still, it was very much tolerable. Emma Stone makes sure that the viewer feels the emotions and struggles of Wichita alongside her dialogue delivery.

Zombieland gets a 9 out of 10 because of the wholesome entertainment that this film has to offer. While watching not a single minute is boring. There are only four major characters in the movie and it is wonderful light-hearted stuff that everyone is going to love. The music too is very energetic. I would recommend it to anyone who loves to watch some good quality comedy stuff. A word of caution though, the film contains some cannibalistic scenes which some people might find very disturbing. But, I guess, this is something that we all expect from a zombie movie, right?

P.S. Zombieland is a good movie to watch on a weekend when you have some free time to enjoy with your loved ones.