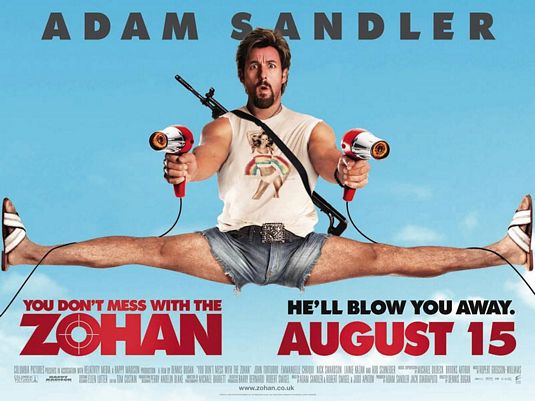 Movie – You Don’t Mess With The Zohan

Whenever there is a movie about Israel and Palestinian conflict all one could imagine is a serious drama full of emotions and hatred for each other. But, You Don’t Mess With The Zohan is a totally different one from the established norms when it comes to movies featuring this “eternal” conflict on the big screen. It is a great to watch comedy stuff which is of course, very nonsensical and absurd. The film features Adam Sandler in the main role of Zohan (an Israeli combat commando) who is without doubt the best in the world. With Adam Sandler in a movie your expectations go so much high and one always expect a good quality comedy and humorous stuff from him. And, Adam hardly fails to deceive us. In this movie too he has been at his best. Zohan is a story of a guy who is the best in “killing” business and highly valued by his country. But, deep down in his heart he has another dream to fulfill. Zohan wants to be a “Hairstylist” and tells his parents about his will to leave the army and going to America to become a great hairstylist. One day while fighting his nemesis Phantom (a Palestinian militant) Zohan fakes his own death and secretly leaves the country for New York.

In New York, Zohan completely changes his get-up and tries to get a job at a salon. After many attempts he finally gets a job at a struggling salon owned by a young Palestinian woman named Dalia (Emmanuelle Sophie Anne Chriqui). Slowly Zohan makes a huge fan base of his and the salon starts getting huge customers. Everything is going well in Zohan’s life until one day someone recognizes him and informs Phantom about him being alive. Now what will he do? That’s the stuff you guys need to find out yourself..! The film ends on a peaceful note when Phantom and Zohan fights the enemies of “peace” together and the Israeli and Palestinian communities of New York accepts each other’s existence amicably.

My Verdict & Rating of The Movie:

I have rated this film 7/10, I could have given it a better rating had it been a little short in length. The movie drags for about 2 hours which is a bit too much keeping in mind that it don’t really have a significant story. Still it is a nice movie to watch and if you too love seeing Adam Sandler as much as I do then you can’t miss this film. The film has many ‘sarcastic” scenes and dialogues that defines the Israeli-Palestinian relations. Zohan gives an important “message” to the world that in the fight of two neighbors the third always benefits. This movie also gives a solution to the conflict and that is to live in peace “accepting each other right to exist”. In my view one should watch this movie for some awesome acting by Adam  Sandler and the rest of the cast.