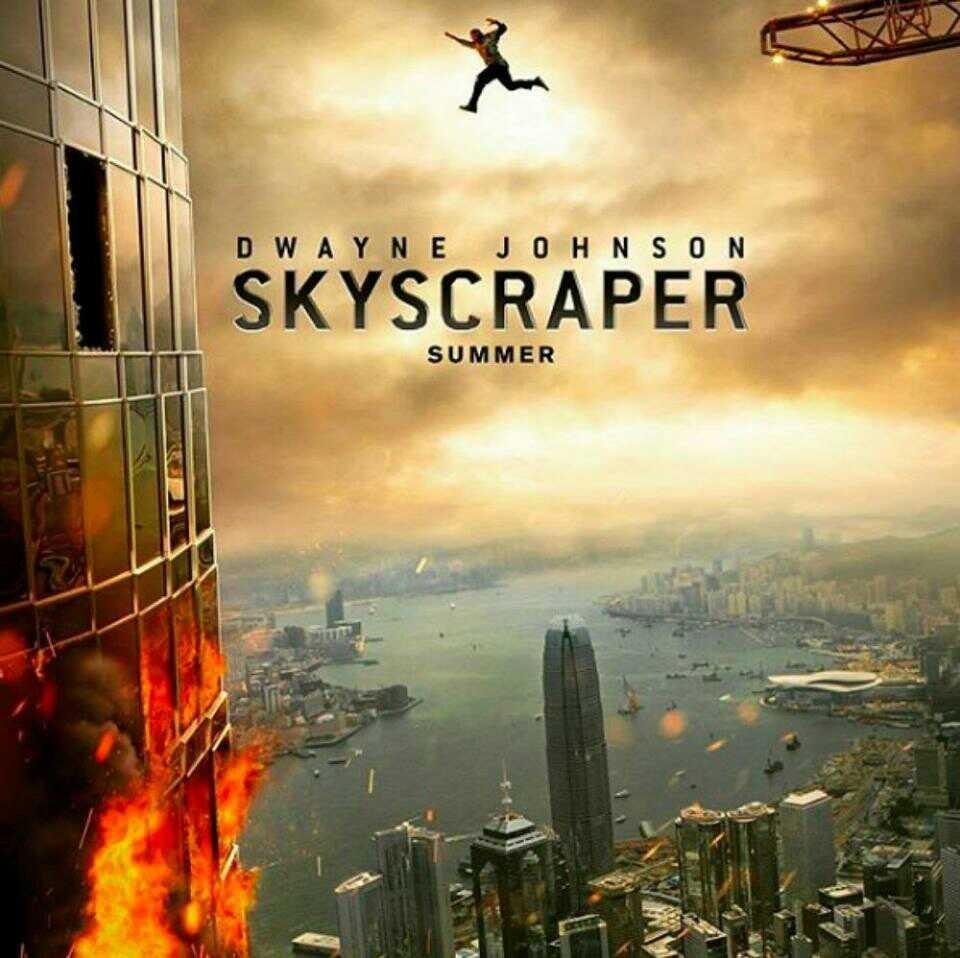 Dwayne Johnson aka The Rock: Talking about him one thing comes to mind, “Is There Anything That The Rock Can’t Do”?. The answer is plain NO! With Dwayne Johnson on the screen everything seems possible. In Rampage earlier this year, Rock saved the Chicago city from giant size mutant wolf and crocodile, and in Skyscraper movie he saves his family from the world’s tallest building-set on fire by some terrorists/underworld mafia-with an amputated leg using ‘duct tapes, rope and a few building tools’.

Many people are of the view that Skyscraper movie is highly inspired by 1974’s Towering Inferno and 1988’s Die Hard. I haven’t seen any of them, so it is difficult for me to give any comment in this regard. Without further delay, I would focus on Skyscraper movie review.

Will Sawyer (Dwayne Johnson) mets an accident on duty and loses his one leg. He lefts FBI and starts working as a security consultant for skyscrapers. Will gets an opportunity of a lifetime when he is approached by Zhao Long Ji (Chin Han) to assess his upcoming building The Pearl’s (the world’s tallest skyscraper with 240 floors) security. Will decides to take up this task ignorant of the dangers coming his way.

Soon after assuming his responsibilities for the new project, Will gets to know that there are people who want to destroy The Pearl. These miscreants set The Pearl on fire by hacking its security systems. As the skyscraper starts burning from 96th floor, Will attempts the greatest human rescue mission in the history; and that too alone! to save his 2 kids and wife. Don’t worry, I don’t want to ruin the surprise for you by writing details of this rescue mission as it is something worth enjoying on your screens. However, it would be a shame, if I don’t tell you guys that the scene showing Dwayne Johnson climbing a crane and jumping from it to break into The Pearl is the most entertaining moment of Skyscraper movie.

When you have Dwayne in the movie, one thing is sure: mind blowing action! Although we have seen The Rock fighting and conquering his enemies many times before too. However, this is the first occasion that we saw him nailing it in the role of an amputee. Once again Dwayne has done full justice to his role in a movie. In fact, it won’t be wrong, if we say that it was Dwayne’s brilliance that saved this “Skyscraper” from falling down on ground despite its plain, predictive, and thin story-line.

The rest of the cast too has performed well; the acting of Chin Han is worth mentioning. He is looking great in his role and provides a perfect support to Skyscraper’s script. After a long time, we also saw Wild Things star, Neve Campbell on the big screen (playing the role of Dwayne’s wife).

My Verdict of Skyscraper Movie

I am giving this film, 8 out of 10, mainly for its background score, Rock’s acting, and “The Pearl”. I think Skyscraper is a good one-time watch stuff. The special effects and cinematography are really worth watching. Overall, Skyscraper is way away from a true-to-life movie. A must watch, for all die hard fans of Dwayne Johnson!