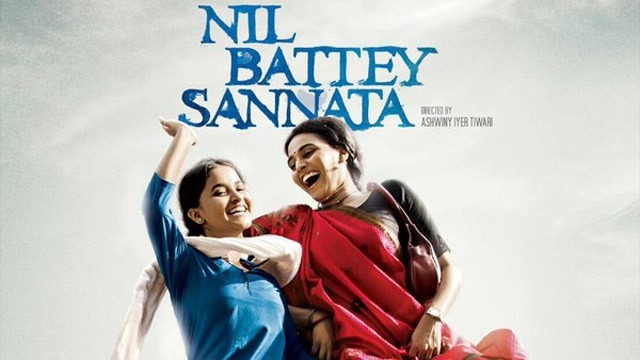 Nil Battey Sannata is a Hindi saying or you can also say proverb that means “absolutely nothing”. This is often used for students who are not so good at studies. Ashwiny Iyer Tiwari‘s, Nil Battey Sannata, is a touching story of a mother and daughter who love, hate and eventually explore each other in the movie.  Apeksha Sahay aka Appu is a teenage girl who is now a student of class 10th, but the problem with her is that she doesn’t takes her studies serious.

And this is bothering her mother, Chanda, a poor woman who do lots of pity jobs to make her end meet. Taking notice of Chanda’s problem, Dr. Deewan (her employer where Chanda is a housemaid) suggests a solution. And, here starts Nil Battey Sannata’s wonderful journey which is enjoyable till the very end of it. Chanda, despite being opposed by Apeksha finally decides to join her school as a class 10th student.

Apeksha, is not so impress by Chanda’s decision and stops talking to her. At school, Chanda spreads her magic and slowly becomes popular among the other classmates as well as teachers. Seeing this Appu gets jealous of her and proposes a bet to her. The bet is that, if Appu can score better than Chanda in Maths then Chanda will stop going to school.

Chanda looses the bet and stops going to school. But, things take an ugly turn between daughter and mother’s relation when, Appu steals money from home and again gets bad marks in school test. This time, Chanda takes an oath to show Appu her true value by beating her in rest of the exams.

One day, Chanda, meets an IAS officer and asks him what she can do to make her daughter like him? He replies that only hard work and right approach towards the goal can make Appu like him. The movie ends when Appu is giving interview, and someone asks why she wanted to become an IAS and she replies because she doesn’t want to become a “housemaid”…

Excellent acting by Swara Bhaskar, Pankaj Tripathy and Riya Shukla is not just the only reason to watch this Bollywood film. The movie has some great laughing stuff in the form of “one liners” and some funny Hindi stuff which burst you into laughter. One thing that is commendable about Nil Battey Sannata is that this movie turns out to be a team effort. Every character seems dependent on as well as supplementary to each other. The music too is fine and very “situational“. It takes the movie forward and one never feels that songs are kind of “stumbling blocks” as they often are in Bollywood flicks. For me, I enjoyed the acting of Pankaj Tripathy as the school Principal. He looks exactly like a true “Uttar Pradesh Government Teacher”, of course with no disrespect to UP Government teachers.

I have rated this film 10 out of 10. Yes, I really feel anything less than 10 would be an injustice to this film’s director as well as cast and crew. The movie set in Agra is a wonderful watch. I would recommend Nil Battey Sannata to anyone who love “low-budget” Bollywood movies. So, forget everything and watch this beautifully directed and wonderfully written  film this weekend.