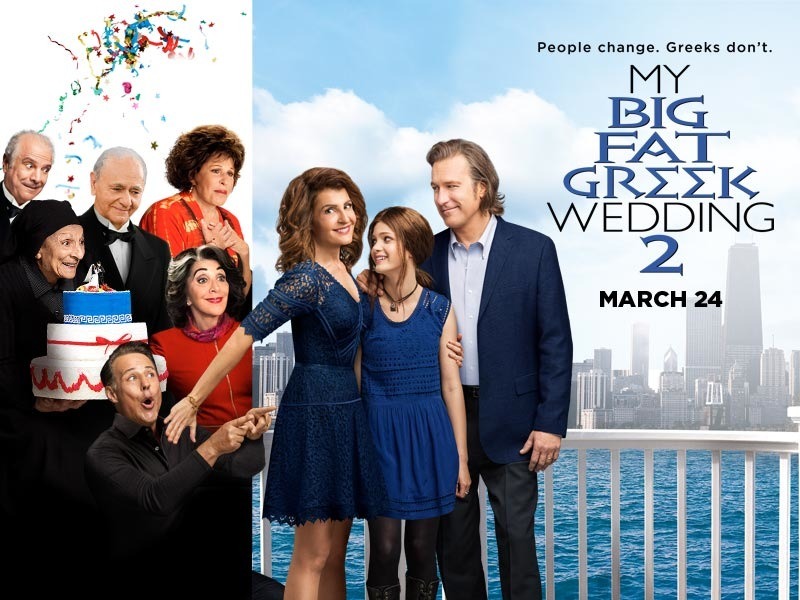 This film is a sequel that is made almost 14 years after the success of first part named “My Big Fat Greek Wedding” was released. I had great expectations from it as I found the first part “unexpectedly” wonderful. But to my utter disappointment My Big Fat Greek Wedding 2 is a “below par” movie that fails to entertain. Somewhere, I feel as if  Kirk Jones directed this movie just hoping to cash on the success of first part.

Now talking of the plot, it is somewhat not comic as well as looks weak. Toula (Nia Vardalos) and Ian (John Corbett) are now going through midlife crisis. Their daughter Paris (Elena Kampouris) is their main concern as she is looking to apply for university education in some other city. Meanwhile, it is revealed that Toula’s parents are not “officially” married as the priest never signed their marriage agreement. And starts the “adventures of Portokalos family” as they prepare for the marriage of their parents.

My Big Fat Greek Wedding 2 has few “laughing scenes”, but as a whole it is just boring. One feels as if the movie is stretched without any reason at all.

My Rating & Verdict of My Big Fat Greek Wedding 2:

I rated My Big Fat Greek Wedding 2 only 6 out of 10 and that too very “generously”. I liked the first part and rated it 10 on 10. I am quoting a line from Rogerebert.com about Nia Vardalos Her script is a mess, and no amount of Windex can clean it up. And, I too fully agree to this thought the script is really messed up. The only reason one would end up watching this movie is because of the fact that they loved the previous part and believe this too will be on par with it. Midway in cinema hall I felt like going back to home, but as I already paid a big money for the tickets I somehow managed to watch this film till the end. In my view all you guys need to do is just “SKIP” My Big Fat Greek Wedding 2. In case, you have nothing better to watch then go for it, but at your “own risk”….!

Stay Tuned for many more reviews coming your way…..