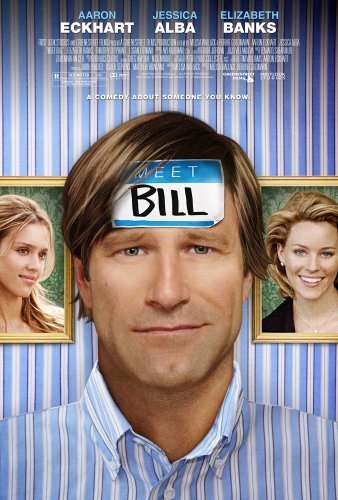 I watched this film last night “without” any expectations and now I am writing a review of Meet Bill. This is a typical movie a person who seems to have everything in life, except that inside his heart he is not really happy with anything. Aaron Eckhart is playing Bill a middle-aged man who is married to a beautiful and rich woman. He is working on a “needlessly created” position in a bank which is owned by his father-in-law. Here starts Bill’s misery, feeling himself as a failed person he is planning to start his own business. Bill meets Jane and Jim and discusses with them the proposal of buying a “doughnut” franchise. But, his plan seems to fall apart as he finds about his wife’s infidelity. This makes Bill really angry and he decided to attack Chip Johnson (Timothy Olyphant) a celebrity with whom his wife his cheating him. As Chip is a media celebrity and popular local TV host, the attack on him lands Bill in a very precarious situation where he becomes a joke for the whole city. Everything seems lost for Bill even his wife as well as his dream of having a doughnut franchise.

Here’s comes a kid (Logan Lerman) in the picture, he is supposed to stay with Bill as part of a “mentoring” program of which Bill’s bank and his family are a part of. The kid (whose name is not mentioned in the movie for reasons of course unknown) is a teenager who is looking for opportunities to have fun. But, for Bill he proves to be a life changing person to meet. Kid assures Bill that if he change himself and tries to look cool he can get his wife back. He even suggests Bill to make Jess (Elizabeth Banks) fell jealous by having relationship with other woman/girl. Now comes Lucy (Jessica Alba) who is a young girl working in a mall. As Bill requires his wife to meet with Jane and Jim for the doughnut franchise deal he takes Lucy with himself as his wife to them. Somehow, things get back to normal between Bill and Jess and in the end of the movie she agrees to his proposal of having a franchise. She even goes to Jane and Jim for finalising the deal. Here’s comes a twist, Bill meets Jess at Jane and Jim’s office and tells her that he came to say no to them for the deal. But, he feels happy that Jess has come herself for the deal. As they finalize the deal and gets the franchise Bill tells Jess to take this herself as he is not interested anymore. He leaves Jess there and later on Bill is seen meeting The Kid in his school and saying goodbye to him. What we can assume is that Bill went on a journey to explore himself and life after been living a frustrated life for many years.

WHAT TO WATCH IN MEET BILL:

Aaron Eckhart as Bill has done a good job in Meet Bill. All the supporting characters too have done a decent work. As the movie is comedy based one expects a lot of laughter in it, but unfortunately there’s nothing much to laugh about in Meet Bill except on few places. So, more or less it is more of a drama comedy movie. The storyline is not that strong it’s a normal one. Every now and then we meet people in our lives who are not really satisfied with their lives and Bill too is one of them. Although, at places you feel the misery of Bill’s character and feels sad for him. The music of this film is okay and there’s nothing much about it.

MY RATING AND VERDICT OF MEET BILL:

Having read the above things you guys must have guessed that I am not really impressed by this movie and that’s the reason I have rated Meet Bill only 6 out of 10. I really felt that the storyline and the plot was a bit weak. Meet Bill could have been a serious drama movie or a pure comedy. But, all I can feel is that it is something “between” those two. Anyways, if you really love movies and have a passion for cinema then watch this one too, it is not that bad. After all it was premiered in Toronto Film Festival in 2007.