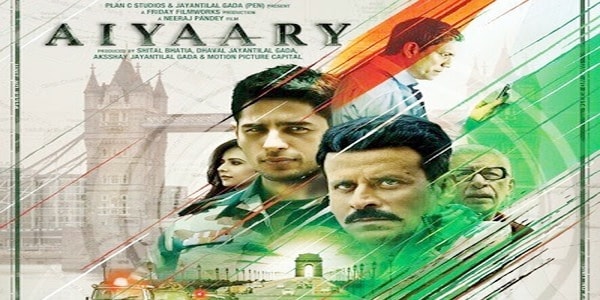 Aiyaary…means the art of deceiving which seems magical. The promos, however, did look promising and magical and being a fan of Neeraj Pandey’s direction, it pulled me to theater to watch it.

As the promos suggests, the movie is based on the Indian army where Sidharth Malhotra is playing the role of Jai Bakshi who is a part of special force (a secret force/division) that performs the coveted operations of the Indian army. He is led by Manoj Bajpayee aka Abhay Singh, the “Aiyaar” of the movie along with 5 other members.

Jai Bakshi, while doing his job finds out some dirty secrets of the army and the insiders behind it. Analyzing what would happen to him, his team, army or the country for that matter if the conspiracy he found out about an arms and ammunition deal cracks down. So, he decides to handle it his own way which, in turn, makes him go rogue and projects him as a traitor. Manoj Bajpayee gets on a mission to stop Jai Bakshi, the brightest and his favorite member of the team and his girl friend Sonia (Rakul Preet Singh), the internet hacker, from getting successful in their mission.

Manoj Bajpayee has done total justice to his character with his flamboyant acting skills. He looks convincing in the role he plays and steals the show. Siddharth, however, nowhere looks like a soldier…just by wearing the uniform, one can not become or portray an army man. Aiyaary as a film has a brigade of fine actors like Kumud Mishra, Anupam Kher, Pooja Chopra, Naseeruddin Shah, and Adil Hussain, but none of them were given the roles that they could have nailed it.

In fact, their appearances were so short and untactful that it made me disappointed. The plot was not easily understandable or intriguing. It was a confusing story. Dialogues and screenplay were very weak. The direction was very poor. The only reason I kept glued to the movie was because I was waiting that may be something interesting would happen. The scenes were too exaggerated and boring at times. The climax of the movie was totally abrupt. It left you with a feeling that the plot defeated the purpose it actually based on. Didn’t feel like it was a Neeraj Pandey movie…It felt so amateurish. All n all not worth spending time n money.