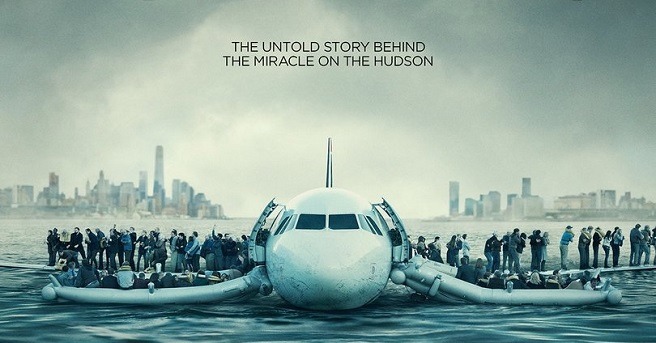 Directed by Clint Eastwood, Sully is an adaptation of a book written by Chesley Sullenberger and Jeffrey Zaslow. The film is based on the famous incident of “Miracle On The Hudson” where an US Airlines plane ended up landing on the water and without any causality on 15th January – 2009.

For Sully’s review I am not going to talk about the film’s storyline as everyone knows about this incident. I will rather focus on other cinematic areas and how Clint Eastwood has executed this story on the big screen.

The film’s starting sequence is great to watch and sets the tone for the movie. Although what follows next for about one and a half hour is not that “action packed” as you would expect from the first scene. But, then the movie is not supposed to show anything extra then what actually happened on January 15th 2009.

Clint Eastwood has kept everything simple and easy to understand for the audience. There is nothing over dramatic or constructed in Sully. The film follows the events as they occurred and tries to tell the “behind the scene” story of what actually prompted the Captain to land on water. Even the scene of landing on the Hudson river feels almost the replica of the actual footage of the incident. There was some criticism of Clint Eastwood for showing NTSB in bad light. But as a viewer I didn’t feel it. Yes, they are shown as professional and strict guys, but then this is their job and they were simply doing their job.

Why to Watch Sully?

Well, when you have Tom Hanks in the movie what else you would like to see? Yes, Mr. Hanks did it this time too. He looks awesome in those white hairs and mustache and you will love him in this avatar. Tom as Captain Sullenberger has literally carried the movie solely on his star prowess. Aaron Eckhart as Jeff Skiles has done a decent supporting job. Talking of direction, the camera work looks extremely decent. Editing is sharp and background score is slow but good enough. I liked the last part when Tom and Aaron are facing the public hearing that was an emotional and captivating part of the film. The manner in which Captain Sullenberger defends himself is worthy of watching.

The movie gives us a clear picture of what actually was going through the mind of Captain Sullenberger when he decided to land on water. It also shows his dedication towards his job and the human nature’s weakness as well as strong side. And, the most important of all “humanity is still alive”…

I gave a thumping 9/10 to Clint Eastwood’s Sully. It is based on real events and they are shown with utmost truthfulness that I really appreciate. If you are a serious cinema lover then go and watch it. Just one thing from my side “Sully is a slow-paced film and you need patience to watch it”.

Stay tuned for many more reviews to come your way…!