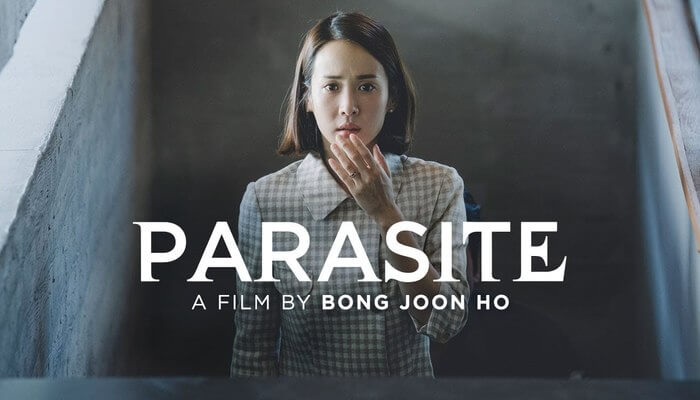 The best way to watch and experience this masterpiece by Bong Joon-ho, that has been celebrated internationally, is to watch it with as little information about it as possible. If you are reading this review before seeing the film and have somehow managed to stay away from all the spoilers and attention this film is getting, I would suggest you stop and open up Amazon Prime on a new tab and watch ‘Parasite’ right now. Adding to the hype that already surrounds ‘Parasite’, this movie is so spectacular and is truly an amazing cinematic experience.

This cinematic masterpiece by Bong Joon-ho is a perfect tragicomedy, where a poor family come together to con their way into the life of an uber rich South Korean household. This movie is a tale of two families, each from different ends of the socioeconomic spectrum. ‘Parasite’ checks off as the complete entertainer as it dwells through so many genres through-out the movie, what starts off as a comedy goes into a thriller, murder mystery and lastly into a dystopian futuristic fantasy.

The first time we see the Kim family is in their semi basement house in the slums of Seoul, South Korea. The two teens are pacing through the home to find other people’s WiFi that they can connect too. They manage to find a weak connection which requires them to squat in the toilet. This gives the viewer an indication of where the Kim’s stand on the socioeconomic spectrum. If that was not clear enough in the next scene we see the Kim’s leaving their windows open while the streets get fumigated, they do this because we see the mother Chung-sook, played by Chang Hyae-jin, complaining about the cockroaches that are in the house. When the son Ki-woo, played by Choi Woo-shik, is given the surprising opportunity to tutor a school girl, who belongs to one of Seoul’s wealthiest families, he gets his talented sister to help him forge a college degree. This helps Ki-woo con his way into the tutoring job for the Park family.

A magnificent modern and uber luxurious house with the view of a lawn going on for miles and beautiful mountains, this house is everything the Kim’s have ever dreamed of and more. Mrs Park, also going by the name of Yeon-kyo , played by Cho Yeo-Jeong, who is an anxious and uptight housewife, tends to her teen daughter and hyper 7 year old son. The lifestyle the Parks have is completely dependent on hired help, which include; tutors, a driver and a housekeeper who has been at the house even before the Parks bought it. Finding an in for his family Ki-woo ruses a plan on getting his whole family to work for the Parks. He starts off with getting his sister to be an art tutor for the 7 year old son, then Kim brother and sister execute a plot and get the driver fired creating an in for their father. Lastly the father, song and daughter get the loyal housekeeper kicked out creating a vacancy for the mother.

As seen many times before in Bong’s films there is a recurring theme of distrust of wealth and authority, this has been seen in Memories of Murder in 2003 and also in movies like Mother, Okja, The Host and Snowpiercer. The Kims may be living in the slums and not have any wealth to their name but they prove to be every bit if not more smart than the Parks, who get put off by the smell of people who travel in public transport.  When we talk about deception and swindling, those who are living in the uber luxuries of Seoul are as familiar with the art of conning, as the people who live in semi basements in the slums.

Jung Jae-il’s fantastic hair-raising music perfectly fits with the tonal shift of the movie. We hear the elegant piano sequence in the beginning to the scaled-down version of The Belt of Faith and then move to the chorus in a drama. It is evident that the music is played as normal even when the action in the scene jumps from humor to suspense to horror and then back to humor, this helps with the viewing experience as it evokes the reality and relatability and does amplify the tension of the scene.

I have chosen to give ‘Parasite’ a 9/10 because I would best describe this movie as a gasp triggering cinematic masterpiece. With the amazing performance given by the ensemble cast, who brought to life the characters so beautifully, that were written by Bong Joon-Ho. This tragicomedy will captivate you from the get go and change your movie watching experience. Therefore, it is no surprise as to why ‘Parasite’ has done so well globally and is a four time Academy Award winner.

Note: Parasite (Gisaengchung) was premiered under the category of Global Cinema during the 18th Pune International Film Festival 2020.