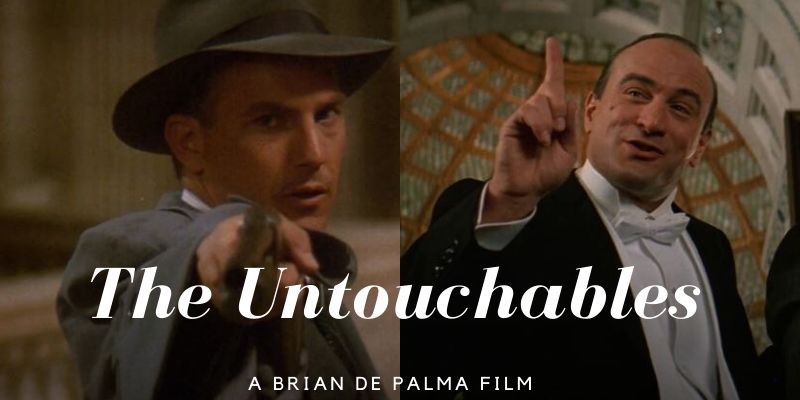 The Good, the Bad, and the Classy.

This is one of those classic but filmy movies which hold on to your heart. The Untouchables is a pure classy movie. But does being classy but too filmy make you age well? Unfortunately, no! And some issues related to that manner caused this movie to not surpass the level and be the classic, it could be.

Hey hey! Hold on. Because the movie is still a gem nonetheless.

It is based on the true story of how Eliot Ness (Kevin Costner), the famous American Prohibition agent brought down Al Capone, the legendary American gangster, and businessman of the early 20th century. In this movie, everybody is presented as a one-dimensional character, either he is the hero or the villain. Now, I don’t think it makes the movie weak. The film’s basic purpose and intention are to tell the tale of Eliot Ness.

The performances here are decent enough, though sometimes it can be too cheesy and filmy. Kevin Costner’s acting is in the mixed bag, sometimes he is really good and at times he loses his charm. But the main attraction of The Untouchables is Sean Connery as Jim Malone and Robert De Niro as Al Capone. These roles are the gems of their careers.

The problem with this movie is mostly about the screenplay. It could have been better, the corny simplistic moments are not executed well. Plus, the characters need a bit of build-up, so that we can admire them more. All in all, this film is sometimes too, too simple which makes you lose your interest.

The best thing about this movie is the camera work, which is damn impressive. The action scenes are phenomenal, the baby carriage scene is a pure classic gem. This movie has one of the best production designs, it provides the best look at the 30s and 40s hands down! The great costumes, great sets, great cars, great guns, great locations, and a great team. Few scenes of drama are really good as well.

Overall, for the fans of the old era, this is definitely a gem. No special story, no special screenplay, but the moments will be heart-warming enough for all. Nonetheless, this movie could have been the gold of an era but it isn’t. The Untouchables gets 7.5 out of 10 from me.

Check out our entire collection of Crime Movies Here

Based on: The Untouchables by Eliot Ness and Oscar Fraley