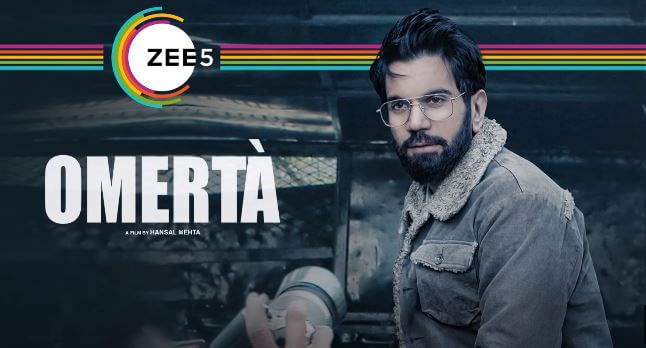 Terror has its own background! Though we all know it’s a bad and ugliest type of feeling, it has its origins too. And this terror is caused by the terrorists! The people who think beyond dangers and plan without humanity. In the recent movie, Omerta, you’ll find the same fear ungrounded and giving you goosebumps. One of the most exceptional bio pics the world has witnessed- this movie surely opens up for a different kind of entertainment, more so- a harsh one! After delivering fabulous hits like Shahid, Aligarh, City lights, the most amazing duo-Rajkummar Rao and Hansal Mehta comes together with another blockbuster!

The main character of the movie — Omer Saeed Sheikh is played by Rajkummar Rao who gives life to this role with all his might and heart. Apart from him, Rajesh Tailang, Rupinder Nagra, Keval Arora and Nisha George can also be seen adding their distinct roles in the movie. It is directed by Hansal Mehta and produced by Nahid Khan and Shailesh R Singh.

The extraordinary attractions of the movie!

Omerta couldn’t be called a monotonous, entertaining movie of Bollywood. It is something that you wouldn’t have seen before. When they claim that it shows the evilest side of the evils, we believe that they have succeeded in the task. The real story of a dangerous terrorist brought to life with Rajkummar Rao leaves you in doubt about the havoc he would have created back then. This movie depicts his background and the way he brought a cyclone of terror in India through his actions. The mesmerising way the actor sinks deep into the skin of the character is enough to hook you to the screen. This is one of the top 3 best performances played by Rajkummar Rao following Aligarh, Bareilly Ki Barfi and Trapped.  Not to forget the unimaginable change of events that follows each other. You couldn’t have thought of the ways a person’s mind can think and how can the person still be unmoved!

A Pakistan based London resident, Omar Saeed Sheikh leaves all the normals of his life to engulf hatred with open arms. You’ll see how a sane person gets dramatically brainwashed and thus turns into a maniac or more so an orthodox extremist who couldn’t think of anything else but of avenge for his brothers. He gladly tags himself a Jihadi to help his unprivileged brothers and sisters in Kashmir, Syria and other countries. This is the hatred that brings him to India to spread the worst of terror!

It’s Omar who becomes the main person behind the tourists kidnapping that happened in India back in 1994. Later, his hate and crime reaches on its peak until he kills a prominent journalist, Daniel Pearl. This finally got him behind the bars in Delhi from which he soon got released after the release of hostages that were attacked in a flight hijack. He also was convicted on charges of cruel murder of Rubin Katyal.

But this only gave flames to his dirty thoughts and water to his growing evilness! The same person was said to be an essential person involved in the Mumbai terror attacks.  Omar keeps on spreading the terror even from behind the bars in Pakistan where he is still being locked in.

Check out our our other ZEE5 Originals Here

Omer Saeed Sheikh played by Rajkummar Rao will leave you scared of his anger and hatred shown in the movie. And twists and turns and the hateful events portrayed in the movie are bound to make you wonder if it’s for real. In a nutshell, this movie has a surprising new element that was never shown before with the help of an evil character!

Impressed by the story and want to view it immediately? Don’t worry, now you can stream online anytime on ZEE5 Movie and watch this story of some agonising terror attacks that happened around the world, and most prominently, in India! This incredible movie is now streaming on ZEE5! Ensure you aren’t missing a full on, power packed movie by any chance!!